Now that you have conducted research, it is time to focus on your own colony. Here is your scenario:

You are part of a group of colonists who plan to establish a settlement in the New World. After hearing about other settlements, you have decided to try to settle along the middle of the Atlantic coast. Previous explorers have told you that there is a large bay that extends past the settlement at Jamestown. You plan to sail further into the bay and find an area to settle near the mouth of a river. The yellow areas on the map below show possible settlement locations. 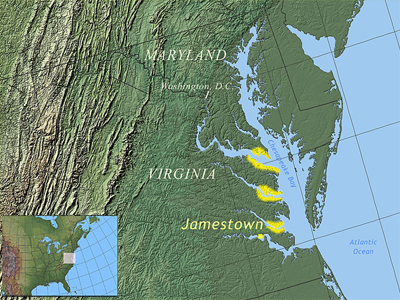 Students should read the information on the page. Point out to students the location of the new settlement, especially in relation to the four case study settlements.