Criteria for a Successful Settlement 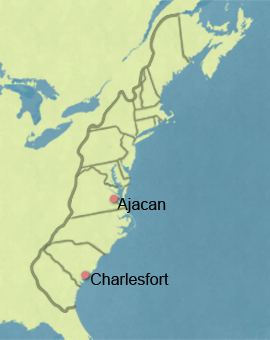 Charlesfort
Charlesfort was founded by French settlers in 1562 on the coast of South Carolina. After exploring the area, the settlement leader, Jean Ribaut, left 27 men behind, promising to return within six months with food. Unfortunately, Ribaut was unable to return to France due to a religious civil war, so he landed in England, where he was jailed as a spy. The men at Charlesfort, who had not planted any crops, began to starve. They built a ship with the help of the local Native Americans and attempted to sail back to Europe. They ran out of food, but were finally rescued by an English ship.

Ajacan
Nine Catholic missionaries from Spain founded Ajacan in 1570 near the mouth of the Chesapeake Bay. However, the missionaries did not bring food to support themselves and demanded that the local Native Americans supply them with food. The Native Americans did not appreciate this demand and destroyed the settlement several months later.